Alternative Press broke the story on the unexpected album yesterday, along with an exclusive preview of the album’s “Get Through the Day” video.

“The song is an audio study of the mind and how we let people’s negativity through comments and gestures towards us become the focus of our day rather than use that day to focus on coming up,” explains TWIZTID’s Jamie Madrox

“We feel like we threw away the gimmicks, theatrical storylines and a ‘everything has to be horror music or else vibe’ and came straight up real and raw on ‘em this time around,” the band says. “Yeah, we still want it…and we feel every song on the record speaks to that.

While keeping Revelashun under wraps, TWIZTID has recently release two singles from their upcoming still-untitled rock album, due out April 30, “Rose Petal” and “Perfect Problem.” Backed by a legion of rabid fans, TWIZTID’s latest Kickstarter campaign for the album was fully funded in under 72 hours and eventually exceeded its funding goals by 300%.

Pre-pandemic, Twiztid wrapped up a tour of the USA with Motionless in White, We Came As Romans, Vans Warped Tour and sold-out headline show at St, Andrews Hall in Detroit. The 12-time Billboard charting artists recently launched an online virtual concert called Netfest: On Your Couch after their next tour was canceled due the pandemic. The virtual concert featured appearances by TWIZTID themselves, B-Real of Cypress Hill, Redman, Tech N9ne, Rittz, R.A the Rugged Man, Chelsea Grin, The Black Moods, Hyro the Hero, Caleb Shomo of Beartooth, Christian Coma of Black Veil Brides and Spencer from Ice Nine Kills. Netfest: On Your Couch was watched around the globe by more than 43,000 fans.

In additional to their musical ventures, TWIZTID’s Jamie Madrox and Monoxide established the Astronomicon pop culture convention three years ago. Taking place in their native Detroit, the convention has consistently featured the best guests from music, comic books, movies and television all together under one roof.

This year’s convention was highlighted by the announcement of TWIZTID’s very own animated cartoon, now in development with producer Ken F. Levin of Night Sky Productions (Amazon Primes’ The Boys) on board as a showrunner. The cartoon is based on TWIZTID’s Source Point Press comic book series, Haunted High-Ons, which sold out and was quickly collected into trade paperback. 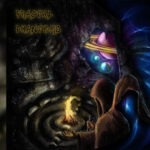