When Guitar-God Eric 13 is not shredding the stage with Combichrist while thousands upon thousands of fans are going apeshit in the crowd, he’s usually hard at working within his own solo career keeping the spirit of rock ‘n’ roll alive through his own riffage originality and unique vocal range. Even Lemmy of Motorhead became a fan of Eric 13’s original band “Sex Slaves” because of 13’s pure original musicianship. Today Eric 13 unleashes his new chilled out Gothic rocker anthem “Black Lipstick” and its bound get your fists pumping all night long in the graveyard! Here is an online UGN exclusive with Eric 13. Enjoy!

Eric 13: To be honest, I haven’t really stopped to consider any deeper meaning of this tune.  I usually find that 3-6 months after I release a song, I’ll hear it and a meaning I didn’t even realize will strike me so suddenly. I’ll be innocently listening and BANG!, it hits me. And I’ll think, ‘Oh my god, it’s so obvious what this song is about, how did I not realize it before!’  I’ll think lyrics aren’t about me, or my life, then the stark realization about how autobiographical they really are kicks in. I’m gonna have to report back on this one.

CTC: Was “Black Lipstick” your own take behind classic oldie songs like “Pretty Woman” and “Love Potion No. 9”?

Eric 13: I hadn’t thought of that, but it is an interesting idea. There is certainly that dreamlike element of Love Potion.  Is it real, or it just a fantasy?  Roy Orbison is an idol of mine – what a crooner. Again, I hadn’t realized it – but my song does share that longing (I hope) with Pretty Woman.

Eric 13: It was the opposite actually.  This is a style I love to sing in, and do all the time.  I just hadn’t really explored it on record. It was time to finally put this side of myself out there. I can’t wait to go further with it, and really push it more.  I wanna go off the deep end and do some really crazy Tom Waits style stuff in the future.

CTC: How did you go about preparing/constructing the guitar solo within “Black Lipstick”?

Eric 13: Well, this solo is done by my friend & song collaborator Oumi Kapila (Filter), so it took me no thought at all! *Laughs*
I do put a ton of thought into crafting the song itself. Seemingly simple songs are actually really difficult to prepare, the arrangement must be really spot on, or it just won’t hold up. I think Oumi and I managed to create a cool tune here, with the solo and other guitar parts striking a cool balance to support the vocals.

CTC: Do you see yourself creating a trilogy of tracks behind “Black Lipstick” like part two and part three?

Eric 13: “Black Lipstick” is definitely the beginning of something new for me, and I do have the idea for the follow up track already brewing.  It might have to wait until I finish recording the other album I’ve written, but there will be a continuation, no doubt.

CTC: When can fans finally expect another solo Eric 13 record?

Eric 13: This year! I have another full album already written and ready to record.  Releasing the Black Lipstick single, with so many different pieces slowed down because of COVID-19, has proven to be a slow and laborious process.  I’m hoping this next set of songs can go a little quicker.  I really want to get it done before the end of the year.  It’s different – way more Ramones-like.  A set of songs written under the cloud of lockdown. I’m beginning pre-production on those songs once Black Lipstick is out there int eh world.

CTC: Do you think the Fall Combichrist Tour with A Killer’s Confession and King 810 will still occur in October?

Eric 13: Sadly, it was just cancelled/postponed, and will instead occur next Spring.  It sucks, but it really is the responsible thing to do.

CTC: Any new thoughts you like to share behind your music career thus far and how proud you are as a musician in general?

Eric 13: The forced time off during the Pandemic allowed me to catch up on a lot of ideas that’ve been floating around, some for years. It’s nice to have the time, and at a point in my career, where I can explore these things.  It’s nice to know that there are people that want to hear these ideas. It’s not pride, but thankfulness.  I have a great job, and I do not take it for granted.

Eric 13: Thanks Chad for sharing the word about my new tune, I hope people give it a listen and crank it up loud.  Shout out to my man Oumi, looking forward to the next one we create. 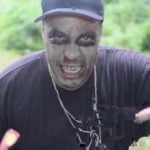 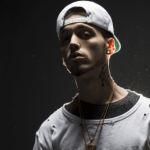