I’m at that weird age where my kids are the ones getting me into new music. Apparently the taste for things tonally morbid is also generational, as it was their current Youtube-powered obsession with Bendy and The Ink Machine fan made music videos that kicked me down a musical rabbit-hole full of Millenial takes on jazz and swing with vaguely Satanic overtones. Eventually this rabbit hole lead me right back to my preferred musical genre of choice, horrorcore rap, only to emerge on the other side of it like Bugs Bunny with a new perspective on a familiar world.

It was while discussing the above-the-board quality of these Bendy-themed videos (remarkable for anyone familiar with music projects driven by internet fandom) that a friend pointed my attention toward Dan Bull, a nerdcore artist from the UK with an extensive catalogue of tracks centered around video games. He had a couple Bendy raps under his belt, so while on topic I was obliged to give this cockney curiosity a listen.

Wow, I thought. This isn’t just a good fan song. Dude’s a legitimately tight rapper. More than that, this is good full fledged horrorcore. To clarify, I’m personally not a nerdcore superfan. I attended an mc chris live show at a local bar a few months prior and his positively dismal performance damn near put me off of the genre entirely. In the past I’ve mentioned how familiar underground faces such as Bukshot and G-mo Skee occassionally incorporate aspects of geek culture into the horrorcore milieu, but with Dan Bull I found that the reverse swing of that subcultural pendulum brought with it a sound that left me both fascinated and impressed.

Within the aforementioned Bendy and the Ink Machine cuts are many components familiar to the voracious consumer of horror rap. Discordant beats, distorted vocals, and bleak storytelling joining the pale faced, appropriately vaudevillian theatrics of an accompanying video. But like an artisan interpretation of a regional recipe these recognizable ingredients are elevated to give the audible dish it’s own flavor of complex time changes and cleverly layed lyrics delivered in a precise, sinister cadence. A melancholic hook is crooned through the crackling filter of an old-timey radio, keeping in step with the subject’s postwar Merry Melodies trappings. It’s a cohesiveness of concept and execution to it that is rarely found even among artists whose sole dominion is the House of Horrorcore.

Thinking this was a fluke I spent the following days researching his catalogue. “The Ill Mind of Dan Bull” as the rapper so cheekily framed it in his Broccoli Bars series. Sure enough, every familiar scary video game title on his monolithic playlist veils a corresponding scary rap. Be it the Orwell-and-opium schizoid fever dream “We Happy Few”, the abrasively nihilistic Resident Evil raprock tribute “Home is Where the Hate Is”, or the unhinged glee of “Little Nightmares” revelling in prospective child death with a morbid whimsy unheard in prose since the work of Edward Gorey. I found each piece to be an example of compelling music capable of standing on it’s own even when divorced from its gaming context. Songs that wouldn’t sound so very out of place on the your favorite underground podcast’s playlist.

You might ask why I consider a scant few cockney interpretations of horrorcore for the Doritos-and-Mountain-Dew crowd as shining gems of the genre. Afterall, he’s been at this for a while now, it just took me this long to find out. The answer’s simple: I haven’t heard anything quite like it. Inside the pitri dish of underground/independent hiphop culture there’s a tragic tendency to foster clones, clones of clones, seen-it-befores as well as a general scarcity of artists approaching the music in new or engaging ways. Anybody can get on the mic and literally scream bloody murder. Plenty do. Too many really, to the point where I’m amazed to find such a solid articulation of the contrary existing far outside of my familiar musical garden. You see, a good horror movie will invoke violence only as a tool to accent or crescendo a cleverly constructed atmosphere. The same method can make for good horror music when properly applied. Especially with rap. Dan Bull’s occasional foray into dark subjects utilizes this principal along with the musical tools at his disposal appropriately and in conceptually smart ways. You’ll find this knack for musical comprehension extends well beyond the bounds of even nerdcore if you bother to look. It’s the existence of such a versatile hiphop chameleon that only reaffirms what I’ve known all along about my favorite and much abused rap subgenre: Horrorcore still has plenty to say and just as many creative ways of saying it. Ironically it’s up to the creators to innovate and not be so afraid of playing with the music.

His music is also available on all major digital streaming services and distributors. 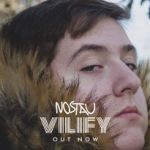